GUITAR WORKSHOP
John James has been involved in hundreds of guitar workshops both "live" (commencing in Cambridge Folk Festival 1969 with Stefan Grossman) and various media (books, videos) since.
In Summer 1974 the first guitar video was recorded. A joint venture by Polyvideo(Leeds) & Transatlantic records. It was shot on film and transferred to video tape. From amongst the guitarists available in the Transatlantic stable - John Renbourn, Bert Jansch, Gordon Giltrap, Ralph McTell,John James was the one chosen having the complete package for the task.
The peak period of the video cassette. (PAL system in the UK & Europe) was the 1980-90's. In 1974 the VCR had yet to become standard piece of equipment in every living room. So it was quite innovative of Transatlantic to make this break through. But they got cold feet with the cost of the transfer from film to tape..and the project though completed and in the can..ended up on the back burner. 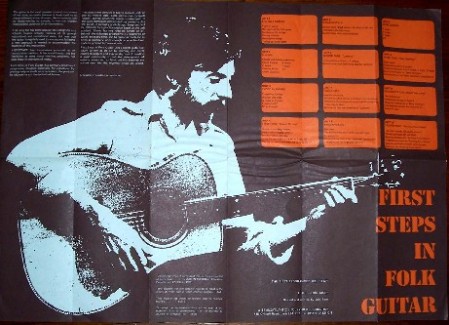 Chris Stuart ,who today is the executive producer of Only Connect BBC TV quiz show, in his write up at the time wrote..  "30% of seconadry schools have video equipment and the numbers are rapidly increasing. The video can be hired at weekly or per term rates of £5 upwards. Buy outright £30."
John James presented this first guitar instruction video, playing a guitar made by John Bailey, borrowed from Bert Jansch. The guitar is now with Richard Barrett in Cornwall .A booklet to accompany the video was produced, First Steps in Folk Guitar,with a guitar notation system devised by Bob Bater, a journalist from Bristol, entitled Unitab.
HISTORY OF THE TAB. BOOK
The transcribing of guitar music on a commercial basis can dated to the activities of Sor ,Carulli & Aquado in the early 1800's . The touring of Sor in the UK and Russia etc really promoted their publications internationally, many then followed their example. The transciptions were usually in staff notation on one stave - treble clef - thus making it essential for the guitarist to read music. Forms of tabulature had existed for the lute and the harp at least 200 years before. The idea of the music being interpreted into guitar fingerboard positions, using numerical data came from the instrument's peculiarity where the same note can be played in different positions. Some advanced form of tabulature even has rhythm notation added.
The first time that recordings of guitar music were sold with a free transcription booklet of the pieces written out in tabulature form was as by Kicking Mule records in the 1970's. This was the brain child of Stefan Grossman. In the USA Happy Traum had begun Homespun Tapes teaching the guitar by a taped lesson circa 1967.
The recordings of Peter Finger and Ton van Bergeyck on the Kicking Mule label were among of the first commercially available LP's in the UK to be issued with a tabulature booket of the music. There was a teaching philosophy behind the venture, the guitar player heard the tune and used the tabulature to help him find the positions on the finger board. Especially useful when the guitar was tuned to open tuning.   The album Descriptive Guitar Instrumentals released in 1976 was the first of John James's albums with a tab booklet. 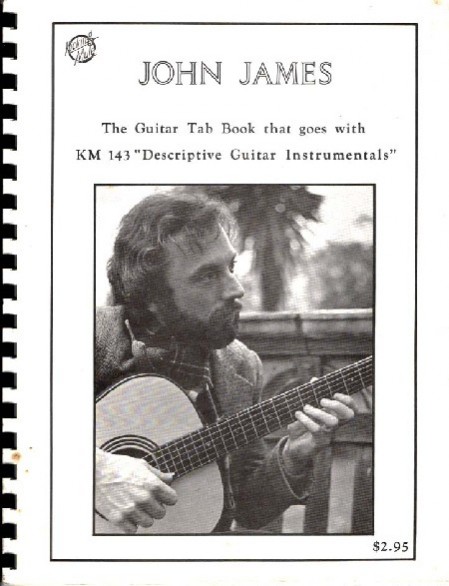 Around 1977 New Yorker ,Happy Traum ,now a Woodstock resident, came over to Europe to tour with the Kicking Mule Guitar festival . Happy had an album released by the record company and had a long association with fellow New Yorker, Stefan Grossman. Sharing the bill of the guitar touring show was John James. The two hit it off and have been pals ever since. Later that year John travelled to the USA and recorded a tuition session for Homespun Tapes. This was originally released as a cassette tape series  of advanced fingerpicking techiniques with tabulature . Currently available as a CD audio lessons "Expand your Fingerpicking repertoire & Technique" lasting about 6 hours.
Here is the link to see the full Homespun Tapes catalogue.   www.homepsun.com 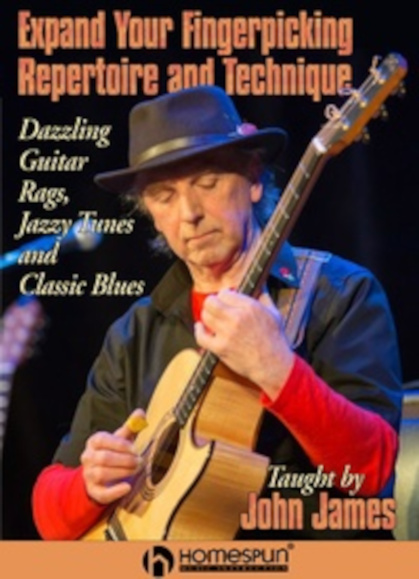 When JJ recorded his tape series for Homespun many standards of the folk/blues repertoire of the day were included Victory Rag.(Doc Watson/ Maybelle carter)  A Slow Drag (Gary Davis) You got something there ( Blind Boy Fuller) classic piano rags such as Black & White rag, Pickles & Peppers, Django Reinhardt's Tears and JJ's own compositions Head in the Clouds and Picture Rag.
Click on the links for tabs of the pieces.
Pickles and Peppers
Picture Rag
Black & White Rag
Head in the Clouds
GUITAR MAGAZINE was first published with George Clinton as the editor in August 1972 with John Williams on the cover. John James became a contributor to the mag (now titled Guitar International) in 1983. Each month a feature article on the history and music of ragtime was published along side a transcription of a piece from Joplin ( Binks Waltz, Heliotrope Bouquet, Rosebud March)  James Scott (Calliope Rag) and other composers including the guitarists Blind Blake,Blind Boy Fuller,Rev. Gary Davis . After about 3 years the series was changed to feature more blues players e.g. Big Bill Broonzy, Lightin' Hopkins etc.
The titles below are links to PDF's of the music (Dots & Tab ) with the feature articles from the magazine at the time included. Click on the title below to download the transcription.
Calliope Rag (Feb 1985)   Binks Waltz (Dec 1983)
Heliotrope Bouquet (Dec 1984)
Rosebud March (Aug 1983)
Alaskan Rag (May 1985)
Pickles & Peppers (June 1985)
Easy Street (June 1990) 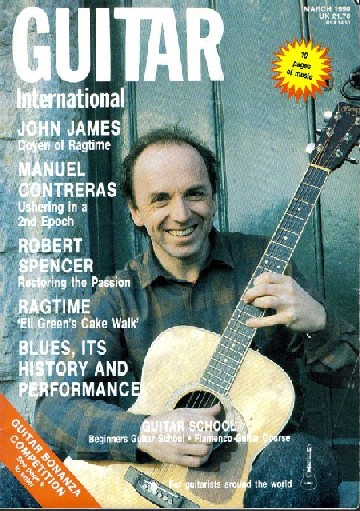 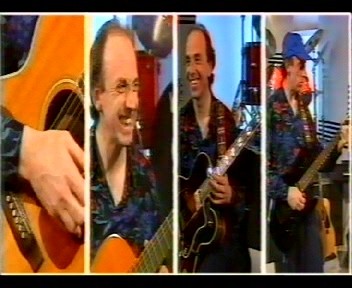 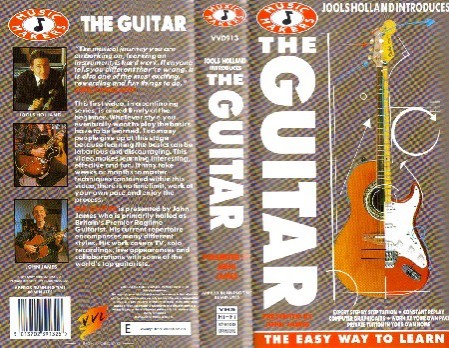 The MUSIC MAKER VIDEO SERIES.
In the early 1990's ,at the peak of the VCR boom, when a Video player was standard equipment in the UK living room, most movies were watched at home by renting a video for the weekend. Virgin Vision in their survey of what people wanted on video ..musical instrument tuition came top. Well nearly top,after how to keep fit without leaving the house, and how to lose weight without really trying !!
So JJ got the call and produced what became the top seller of the whole video series, thanks to Virgin promotion and distribution.

Masters of British Guitar ,presented by Richard Newman, produced by Sound Techniques & Directed by Geoff Frost. Geoff,of course, an inventive audio wizard who with John Wood built the famous studio in Chelsea London on the 1960's. This series became Guitar Maestros which featured such luminaries as Gordon Giltrap,Big Jim Sullivan & Steve Tilston. Clips from the JJ video are posted on YouTube ,one clip gaining 240k views.
OTHER TRANSCRIPTIONS   (CLICK on the title to download)
FEET on the GROUND This piece was recorded for JJ's first Kicking Mule album. 6string to D.
12th STREET RAG       This transcription is by Yu-Yang Lin. Taken from the You Tube video JJ recorded in 2012 . It is an extraordinary work of notation. JJ first recorded an arrangement of the tune in 1981 on an album "With a Suitcase Shaped like That" and published an arrangement in Guitar International Mag. in November 1983.
Back to content